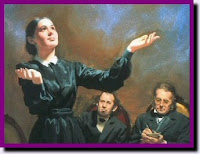 This is edition number 30 of the brain science blog carnival Encephalon, and it's also my final Neurofuture post. Let's go!

Eric Michael Johnson presents The Feeling of What Happens at The Primate Diaries (above image is from his post). Using the examples of phantom limb syndrome and religious experiences stemming from temporal lobe epilepsy, he characterizes spirituality as a "trick of the mind." The post was inspired by an editorial in Nature which included a scientist's religious views, and Eric opines, "Perhaps a return to reasonable arguments based on solid evidence would be a wiser course for the future."

Would that everyone would heed that, Eric.

Pure Pedantry's Jake Young offers criticism of science writing in the New York Times with his post Article on exercise and cognition has correct facts, wrong interpretation. The NYT journalist extrapolated from a study on a spatial memory task in mice by reporting that exercise prompted neurogenesis in the hippocampus which in turn made the mice smarter, when instead what the research concluded was improved performance only in the one task. Jake says, "While it is not necessary to go into the nitty-gritty details of hippocampal neurogenesis, I think that a sentence of caveat that said, 'The link between exercise, neurogenesis, and memory has not been mechanistically established,' would make this article much more accurate."

Stephanie West Allen of Brains on Purpose illustrates a good example of inaccuracy and extrapolation in Anatomy of a telephone game applied to a neuroscience study. Research was reported in a news item, someone blogged about it, someone else write a blog post based on that blog, and…go see where it led. I don't want to add more inaccuracy by writing about the blog post about the blogging of the blog about the news based on the research article. Heh.

Paul Baxter writes an overview of Hemispheric Specialisation in Memoirs of a Postgrad. Refreshingly, he cites five papers and humbly asks readers, "Hopefully, people who know more can fill in some of the gaps by leaving some comments."

In Omni Brain, some chick writes about ACHOO syndrome (autosomal dominant compelling helio-ophthalmic outburst syndrome) a.k.a. photic sneeze syndrome a.k.a. sun sneezing (a.k.a. AAICS contest winner). With the single comprehensive review article that was only available in hard copy from a medical library forgotten in another city while she travels, she relies on memory, abstracts and a 1968 paper to describe the basics of this curious but common neurological syndrome. Fine, but then she wrecks it by rambling about the trigeminal nerve, migraines, horses and seasonal affective disorder when there is no empirical evidence whatsoever linking them.

"Perhaps a return to reasonable arguments based on solid evidence would be a wiser course for the future." Thank you again, Eric. 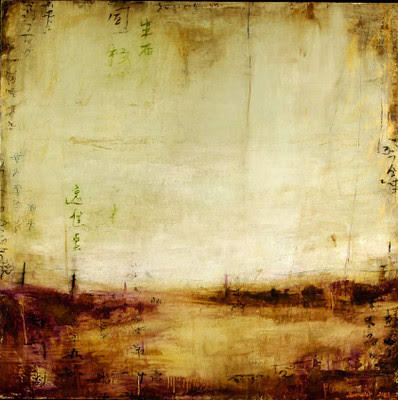 However, since there's no solid evidence about the nature of consciousness, what is a reasonable argument? Here unreasonable is more entertaining, as vlog Channel N features a video with experts from varied disciplines spiritedly arguing Is Consciousness Definable?. (Image: Morning Consciousness (2004), Dionisio Ceballas.)

Cognitive Daily reliably writes reasonable things based on solid peer-reviewed research, so when Dave Munger asks Why are Visual Memories so Vivid? the answer is conservative. He summarizes an experiment on memory of visual scenes relative to length of exposure in an article by David Melcher, Accumulation and persistence of memory for natural scenes. Journal of Vision, 6, 8-17. Melcher found that increased exposure time led to increased retention but not necessarily a long-term memory, and proposed something intermediate.

The inimitable Vaughan Bell of Mind Hacks writes some compelling criticism in the post The psychology of behavior detection officers. America's latest plan to harass its airport users [my words, not Vaughan's] is based on Paul Ekman's research on facial micro-expressions. Ekman has apparently sold officials on a deception detection system despite unproven effectiveness. He concludes, "One difficulty with all deception research is that participants told to lie in the lab are not necessarily good models for 'real-life' deception, with all its complex motivations and emotional force. Lab-based lies are likely to be a poor substitute in an actual covert terrorist situation."

Alvaro Fernandez of Sharp Brains links to some newly published and newly announced research on cognitive training, in Cognitive training research: MindFit, Lumosity, Posit Science, Cogmed. As well, The Ten Habits of Highly Effective Brains is a list of actionable habits for brain fitness (with over 1200 Diggs!). I'm not exactly sure what he means by "don't outsource your brain" but have a feeling I'm doing it right now.

"Perhaps a return to reasonable arguments based on solid evidence would be a wiser course for the future." Oh yeah.

Jeremy Burman of Advances in the History of Psychology submitted five posts, which is against the Encephalon rules, but I'm not so uptight I'll insist on enforcing that. Here's Exemplars in the history of psychology, “Punitive psychiatry” still practiced in Russia?, History of Psychology Conferences for 2007-2008, Conceptions of Giftedness, in light of DVD finding, and Ten things we don’t know about the brain.

From an ad-clogged blog barely distinguishable from a splog, Out of Body Experiences: Medical Mysteries or Scientific Explanation? is posted at FitBuff.com's Total Mind and Body Fitness Blog. Whoever wrote it didn't link the source they've regurgitated, but I've seen posts about this Science study spewed all over the blogosphere. I briefly debated whether or not to read the original journal article in order to correct FitBuff's misinterpretations (like that a VR avatar is a hologram), but decided that if I'm going to waste my time I'd rather do it playing Scrabble in Facebook than outsourcing my brain to them. 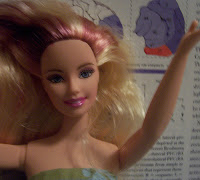 My emotion-schmotions (quote from FitBuff) run a little high around this final contribution. The Neurocritic writes about The Luxury of Neurobranding, which includes a link to a post from the early days of Neurofuture. Anyone else remember the neuroword contest, a invitation to people to coin their own neuro-prefixed word describing a (potentially) new discipline in brain science? It was great fun with 50 entries, lots of chuckles and beginnings of friendships cherished to this day.

A little unfinished business, on retiring. The winner was "neurologism: a word created by prefixing 'neuro' to almost any normal word." After announcing it, Jake Dunagan told me he'd coined the word some time before, in his paper Neuro-Futures: The Brain, Power and Politics. He asked me merely to mention his paper and solicit reader opinions. Lamely, procrastination stopped me. Please do check it out, it's an interesting hypothetical look at a future of cognitive enhancements. What do you think? (I think it's FTW, Jake.)

That, then, is all. May you all have happy neurofutures. Thanks for reading.

The next edition of Encephalon (make submissions here) is scheduled for September 10th, to be hosted by Dr. Deborah Serani.

It's time to retire Neurofuture. I'm not deleting it and may conceivably post something in future, but for now, it's being shelved.

Encephalon, then, marks the end of Neurofuture. Please submit your entries ASAP (via that linked form, or email encephalon.host at gmail.com) and join me in making it a smash farewell party.

Encephalon 29 is now up at Memories of a Postgrad. I'll be hosting the next edition of the neuroscience blog carnival on August 27.

Send your links to encephalon dot host |at| gmail dot com or use the submission form to be a part of it. Further info here. 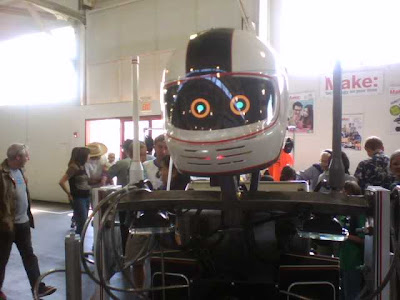 Image: the best-in-show bot at Robogames 07. When I blocked its path, it stopped moving forward and asked my name. I didn't answer but took this photo.

Relationships with robots are examined in this interesting video (or listen to audio alone).

Transrobotism (Human-Robot Bonds). "When a humanoid robot successfully mirrors human emotion and evokes an emotional response from us, what happens to our understanding of ourselves and our emotional reality? This provocative panel discussion on the emerging new realities of human-machine relationships is guaranteed to change the way you think!" Moderated by Pia Lindman, the panel consisted of Rodney Brooks, Joy Hirsch, Sherry Turkle, Peter Galison, and David Rodowick. WGBH Lectures. 01:51:36
link http://forum.wgbh.org/wgbh/forum.php?lecture_id=3413
direct audio link http://forum.wgbh.org/content/forum/3413-2007_04_24.mp3

Brief clip of a child interacting with the robot above:

The Shapes of Thought

An interesting sci-art collaboration between University of Calgary researchers and artists Alan Dunning and Paul Woodrow, attempting to visualize thought in 3D space. They completed a number of projects under the umbrella of the Einstein's Brain Project; this one titled The Shapes of Thought.

The project asked participants to recall traumatic events from their past. They were asked to emote anger, and other primary emotions. Each participant was wired to EEG and EKG sensors and monitored [for as long as 8-14 hours]. The resulting information was visualized as still images using Iris Explorer and visualized in realtime, interactive space using specially developed data acquisition modules. 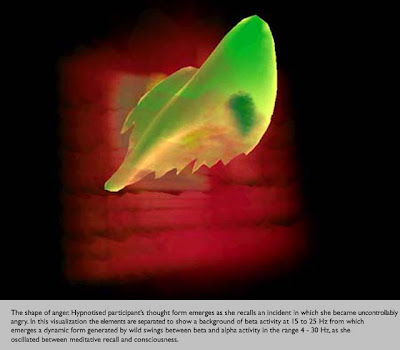 Other images on the site include that of a man repeatedly asked to recall an incident in which he was severely injured, including a period of agitation, and couple of animations.