Mirror neuron backlash has struck! From a spark lit by Chris at Mixing Memory criticizing "massive, overblown publicity" and some iffy mirror neuron research, debate spread like brushfire (or at least, like email). Among the technical commentary and research citations, The Neurocritic was especially pithy in juxtaposing figures from Rozzalatti & Craighero (2004) with an ad from The Gap. Everyone in Mirror Neurons! 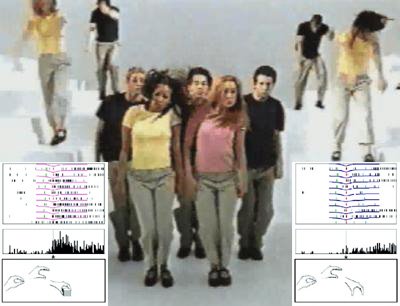 Opinions on research spread through science blogs like a Sesame Street personality quiz does on MySpace; a meme. One quite unique to neuroblogs (I read more than one baffled comment on these posts from casual readers seeking explanation), but with this much passion the issues may pick up wider attention. Wait and see. For now, keeping focus on the community it originated with, this post is the unofficial mirror neuron critic meme blog carnival. I'll add to the list as I find more entries – please comment with your links!

BrainTechSci was ahead of the zeitgeist with Much Ado About Mirror Neurons (mirror neurons linked with telepathy, and more).

In Neurotopia 2.0, Everybody Post About Mirror Neurons! says there's no evidence they exist in humans.

The Neurocritic examines research in Spindle Neurons Are The Next Big Thing, and in a comment on Mixing Memory points to a study - Gridley MC, Hoff R. Do mirror neurons explain misattribution of emotions in music? Percept Mot Skills. 2006 Apr;102(2):600-2.

There is some defense, as at Small Gray Matters with Mirror Neurons Aren't Really All That Bad

Tempest in a teapot (today's ScienceBlogs "buzz in the blogosphere") or will it continue to spread and grow? That's up to you, and your blog.

The Mouse Trap posts more considerations Mirror, mirror, on the wall, who's the most blogged of them all!

Great Post. However, apart from saying something about mirror neurons per se, this sudden, almost simultaneous, spread of criticism may also be related to one simple fact and that is the tendency of neurobloggers to “borrow” ideas from one another…

E. (A blogger who will probably post something about the “mirror neurons hype” in the very near future ;-) )

Please send me the link to your post when it's up. Thanks!