"The brain is the wildcard" 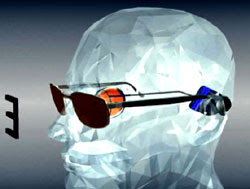 An eye prosthesis implant has gained FDA approval for clinical trials aiming to restore vision to people blinded by retinal degenerative diseases. Second Sight produced a 16-electrode implant device a few years ago, which five patients are still using with success thanks in part to an ultrananocrystalline diamond (UNCD) film protecting its parts from body fluids. Their new Argus II device with 60 electrodes is an improvement researcher Mark Humayun says, "is like a train and a plane, they're that different."

The device consists of a tiny camera and transmitter mounted in eyeglasses, an implanted receiver, and an electrode-studded array that is secured to the retina with a microtack the width of a human hair. A wireless microprocessor and battery pack worn on the belt powers the entire device.

The camera on the glasses captures an image and sends the information to the video processor, which converts the image to an electronic signal and sends it to the transmitter on the sunglasses. The implanted receiver wirelessly receives this data and sends the signals through a tiny cable to the electrode array, stimulating it to emit electrical pulses. The pulses induce responses in the retina that travel through the optic nerve to the brain, which perceives patterns of light and dark spots corresponding to the electrodes stimulated.

While the implant doesn't restore full vision, patients interpret the light patterns as useful images to interface with the world. As Science Daily reports:

Exactly how much improvement can be achieved won't be clear, he says, until testing is underway. "The brain is the wildcard," [Hunayan] says, noting that his team was surprised by the extent to which the brain was able to "fill in" visual information from the limited number of pixels in the first model.

600 to 1000 pixels are the expected requirement to restore full vision such as facial recognition and reading, and this device doesn't have that capacity. Read Visual Prosthesis in the Annual Review of Biomedical Engineering 2005, for a survey of the challenges involved. Though engineering advancements are needed, the Argus II appears to be an important visionary step towards full artificial sight.

Other implant devices in development include the Retina Implant from Germany, hoping to be on the market in 2009, and the Optobionics Artificial Silicon Retina chip using 5,000 microphotodiode cells. Both are subretinal implants that stimulate remaining healthy retinal cells. The Argus II, in contrast, is an epiretinal device that stimulates the optic nerve with external signals from the camera.

I want to read about "The brain is the wildcard" - that's an excellent phrase :)

I am so hopeful since I detached my retina 6 mos ago and cannot read out of detached eye.
I also have lattice degeneration and know so many RD sufferers at the detached-retina groups@yahoo.com so I am espeically excited for new developement in this field.